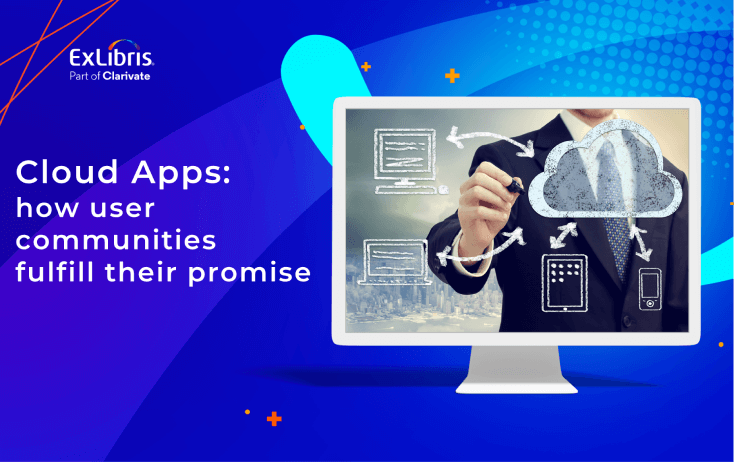 “The Ex Libris Cloud App framework of user-installable apps represents a significant advancement in the realm of major library software applications. This framework provides an elegant model of extensibility and interoperability so that institutions implementing the system can gain capabilities beyond the delivered product.”

That’s what Marshall Breeding wrote less than a year and a half ago in the Library Technology journal.

Now it is time to ask: Have Cloud Apps lived up to their potential?

Cloud apps enable users and partners to be developers

With Cloud Apps, the user community of Ex Libris, part of Clarivate, as well as our partners independently develop original apps that can be launched directly from within products such as Alma, Primo VE, Esploro, Leganto and Rapido.

And develop them, they have.

More than 20 such apps, out of a total of 41, have been created and published by customers thus far. Over 6,200 Cloud Apps have been activated by 3,500 users in 615 institutions. The reception and adoption of Cloud Apps continues apace, with the apps being used thousands of times each month.

What are the most popular cloud apps?

The most activated apps are popular because they provide our customers new, practical and innovative functionalities, workflow shortcuts and integrations. Among them are:

Cloud Apps are also a novel vector for collaboration, as exemplified in the following examples:

Cloud Apps save time and resources

Ever since the Cloud Apps feature was released, we and our customers have seen firsthand how it benefits developers, institutions and end users. Developers publish their apps to the Ex Libris cloud, avoiding the cost or trouble of hosting or maintaining hardware, institutions provide additional functionality and productivity optimizations, and end users – staff librarians and others – access the apps easily and directly from within the relevant Ex Libris product they’re using.

Get started with Cloud Apps

If you’re looking for more information on Cloud Apps or you want to jump right in and get cracking on some apps of your own, here are some links you’ll find helpful:

The promise of Cloud Apps has clearly been fulfilled. Looking ahead, I can’t wait to see what the creativity and ingenuity of our community will lead to next.