It is six months since Ex Libris started the 2016 Linked Data Collaboration Program. Now is a good time to review our accomplishments and directions for the future.

The goal of the Linked Data Collaboration Program is to facilitate interaction between Ex Libris and Alma and Primo customers who are interested in adding linked data features to those products. The program has 41 institutions at varying levels of participation: 24 in North America, 12 in Europe, and 5 in Asia Pacific. The 2016 program is focused on the following primary tracks: Alma Technical Services, Linked Data Publishing, and Discovery. All the tracks have led to active development, with deliverables in production in 2016.

Looking back on 2016, our estimation of what could be done was in some ways too ambitious and in other ways not ambitious enough. Our strategy has evolved over the last year, with the understanding that we need to bring linked data to the vast majority of libraries who may have heard the Linked Data buzz but do not have the resources needed to take the deep dive.

The addition of linked data features to over 700 Alma institutions and over 1000 Primo institutions will serve multiple purposes:

Our understanding of what can and should be done at this time has become more focused. For the sake of simplicity I will describe Alma as a combined track. Alma is adding URIs to MARC records and making those URIs visible to all librarians. Examples of such URIs include Authors, Subjects for leading authoritative authorities (LC, MESH, GND), VIAF, Languages and WikiData. See below for two examples.

Making the linked data visible in various places in Alma helps support the multiple objectives described above. Every librarian that uses Alma will have access to the URIs, thus further educating the market.

The image below shows a typical link to access URIs in Alma.

Below are two displays of URIs retrieved through linked data in Alma. 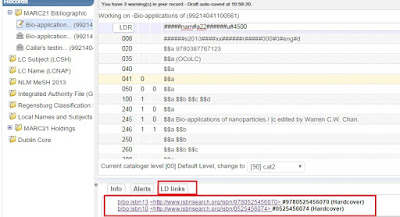 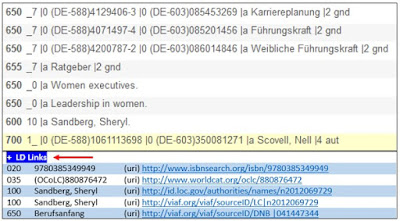 At the same time, the URIs are published downstream to discovery and will be accessible in Primo. These URIs are also exposed in all APIs that return BIB records. For example, they are exposed in the API returning JSON-LD and the new URI support for BIB records returning RDA/RDF. 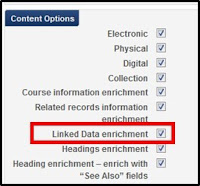 This support is enabled with the click of a button, as seen in the image at left.

Early on, we discovered that our BIBFRAME track was premature. On the bright side, all we are doing for RDA/RDF will give us a good head start for BIBFRAME when it matures enough to be used in a production environment.

Primo, with Summon to follow, will make the URIs available for library use in a new linked data section of its PNX. More importantly, the new Primo discovery interface will have a sample Angular-JS “directive” that displays information based on URIs. This is the real power of linked data: bringing relevant information to the end user that was difficult or even impossible before. The next step will be to include “out-of-the-box” linked data-powered user interface functionality that any library can use in their discovery whether they are experts in linked data or not.
Following are some simple examples of discovery linked data use that will work end-to-end in Alma and Primo without link data expertise.

In the example below you can see how additional subjects are retrieved and displayed from the Library of Congress using Subject Authority URIs as managed by Alma. 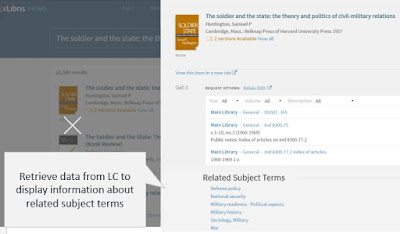 Other useful examples might be additional collaborating authors from VIAF, additional works by the same author from VIAF or WikiData or general information from WikiData. The possibilities are endless.

Soon we will begin thinking about how to further enhance the linked data deliverables in 2017. Let us know what you think –  your input is valuable to us.
And you can read more in our linked data white paper, « Putting Linked Data at the Service of Libraries. »