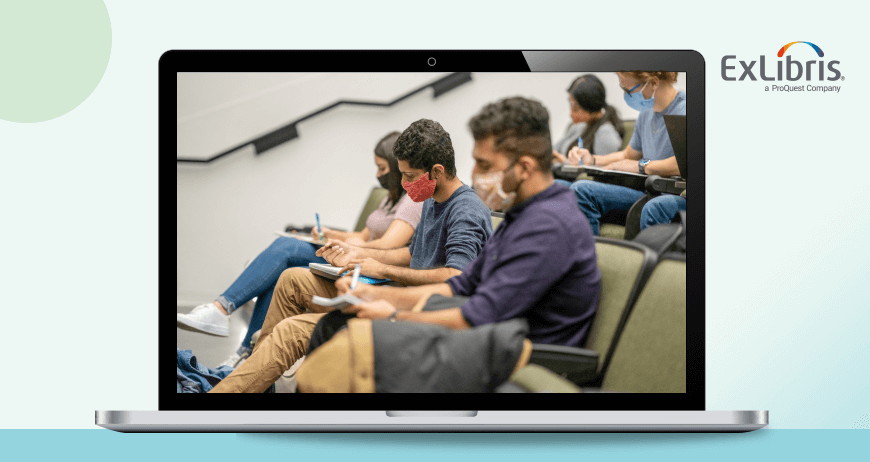 It’s the same story we hear from most, if not all, of today’s academic libraries: in 2020, when a global pandemic shuttered the physical world, institutions immediately turned to the library staff for help sharing digital resources with students in the online classroom.

The story is quite familiar to the five full-time librarians at Illinois Central College (ICC), a midsized community college with major campuses in Peoria and East Peoria, Illinois. Their campus went virtual, and suddenly, they were inundated with requests from instructors for immediate help with course resources.

But in ICC’s case, there was one difference. The school was already considering implementing Ex Libris Leganto, a course resource materials solution. Leganto makes it easier for faculty to assign library resources in the classroom, for students to use those resources, and for the library to support and track their access. Leganto integrates seamlessly with a school’s learning management system (LMS) so faculty don’t need to go anywhere else.

ICC entered into a one-year Leganto pilot (branded as the “ICC Library Reading List Tool”) with some pretty impressive outcomes.

Support for OER: “Our initial interest in Leganto was open educational resources (OER)-related,” said Jessica Bastian, ICC Digital Services Librarian. Using Leganto, instructors can create lists that only include OER – or that include OER alongside library materials, open access content and other resources freely available online. “In the process of identifying resources that would support our campus-wide OER initiatives, we saw a Leganto demo in 2019,” she said, and “we knew early on it was something we were interested in.”

Simple implementation: Once ICC chose Leganto, the library opted for an accelerated, out-of-the-box implementation with few customizations, hoping to have Leganto ready for the fall 2020 term. The library had just migrated to the Alma library services platform, which made the quick implementation possible. “It was a very easy process,” Bastian. “We created a getting-started workshop series, a LibGuide, and visited department and committee meetings across campus.”

Opportunities to build relationships with faculty: When the campus went fully remote, Leganto gave the library the perfect opportunity to build its relationships with faculty, including adjunct faculty, who needed heavy-handed curriculum support. Over the past year, an initial pilot of Leganto has supported health-career students, film students, English students, developmental courses, and college-wide initiatives like ICC’s racial-justice and equity program, based on the 1619 Project, and its One Book, One College program.

Student cost-savings: The library gained many valuable insights from the pilot. The most critical one: giving their students access to digitized textbooks was the top reason faculty used the tool. Through Leganto, more than 2,000 students had access to electronic textbooks and scans of textbooks chapters that they may otherwise not have been able to afford. “Students are often asking: do I put gas in my car, do I buy groceries, or do I buy my textbooks?” said ICC Library Services Director Cate Kaufman. “This helped bridge the gap for them. It’s evidence that Leganto is making a difference for our students and helping us expand our support throughout the college.”

The tool helped capture student cost-savings, something they’d never been able to do before at ICC, and convert pilot savings to real-world predictions. “If you look at digitized library resources on a broad scale, by providing access through Leganto, we have the potential to save students more than $130,000 a year,” Kaufman said. “And we know we’ve just barely scratched the surface – we only expect this to grow.”

Dramatic growth in usage: In its first year, Leganto was used in 88 ICC courses by 29 faculty, who collectively created 65 reading lists totaling more than 1,000 citations. “Usage has grown tremendously,” said Bastian. “Leganto addressed problems during a time of crisis. We initially acquired it for OER, but we found that it enhanced so many of our services. What happens when you take the library from the librarians? Leganto gave us a virtual space and helped us connect with faculty.”

Real insights from users: Feedback from students and faculty was overwhelmingly positive. The ICC librarians said they knew Leganto could help with engagement – but weren’t fully prepared for the level of engagement it created. “We learned that students like using reading lists!” said Kaufman. “One first-year student turned Leganto into a way to compile resources for all her classes. She used it as a resource-management tool for herself. That isn’t at all what we’d anticipated.”

Kaufman said that she can feel a real shift in how the library is perceived within the center of teaching and learning. “It’s enhanced our liaison relationships and given us so many insights on our impact on students, and our return on our investment in our resources,” she said. “We can remember the day we did that demo…thinking this could change the way the library is seen within the institution. Not to be too dramatic, but it really has come true! We’re now in conversations we were never in before.”