University of St. Thomas: A Win in Course Material Affordability 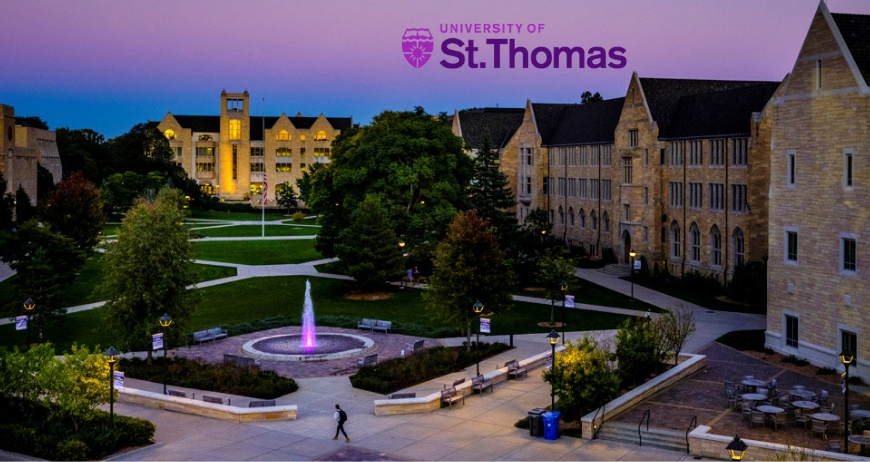 Reprinted with permission from Library Journal

The University of St. Thomas is revolutionizing textbook affordability for students with the implementation of the Leganto reading solution. Greg Argo, Associate Director for Access & Digital Services, and the university libraries, embarked on implementing a new system for providing course materials within the campus learning management system.

Responding to a course materials initiative in the University Libraries’ strategic plan, Argo and his team set out to provide course materials affordably from library holdings. The University now forges new pathways connecting the library with instructional designers and faculty. A key inspiration was the U.S. Public Interest Research Group (PIRG) study Fixing the Broken Textbook Market. According to the study:

A huge value is the collaboration Leganto inspires.

In a climate where student success is one of the most important outcomes for educational institutions, removing barriers to accessing required reading materials is imperative. Scanning for new innovative tools, the University of St. Thomas discovered the Ex Libris Leganto cloud-based software, enabling instructors and Library Staff to build, maintain, and share resource lists that include all material types. Leganto is built on top of the Alma® library management system and can be delivered directly in learning management systems like Canvas, Moodle, and Blackboard via an LTI integration.

Prior to adopting Leganto, Argo analyzed course pack offerings. He found most coursepacks came shrink-wrapped, preventing students from pursuing the readings elsewhere such as in the library’s holdings. One coursepack provided a vivid example. Retailing at $95, approximately 75% of the readings could be supplied via library subscriptions, 15% were freely available online, and 10% could have been digitized from print materials and provided via Fair Use. The cost of that packet could have been reduced to zero.

Committed to its goal to make course readings more accessible and affordable to students, University of St. Thomas implemented Leganto in the fall of 2017. Ex Libris provided consultants to get their cohort launched with three other schools in their consortium, Cooperating Libraries in Consortium (CLIC). The first pilot went live with one course. The organized process enabled an increase to fifteen courses and two branches, with up to 23 courses in the summer. Ramping up was easy enough to have 94 courses on board by the fall of 2018, resulting in a cost savings of $80,000.

“A huge value is the collaboration Leganto inspires. Venturing beyond the library’s walls, we were able to develop partnerships with instructional designers which connected us more closely to faculty,” says Argo. Another key is the seamless integration between Leganto and the course management system, Canvas. “Members of the Library Advisory Committee suggested everyone on campus was feeling ‘new system fatigue’ and suggested marketing it as a part of Canvas, and so we did.” Leganto has benefitted from the relationships with instructional designers and faculty word-of mouth.

The process is flexible, accommodating any prerogative along the continuum spanning those who want to do it themselves, and those who want to rely on library staff to take care of it for them. Whether faculty are dropping off an old reading list or creating one from scratch, Leganto transforms the content, keeping it current and relevant.

Faculty have weighed in with comments such as, “This capability will enable me to do 90% of this on my own with my two fall classes.” Another faculty member states, “I have integrated the resource lists into Canvas and it is so user-friendly for me as professor. It is a one-stop-shop.” Faculty are also thrilled to be liberated of meeting coursepack deadlines.

Leganto has streamlined workflow at the University of St. Thomas by making it easy to create new lists from inside Canvas, improving communications with all stakeholders, provisioning visibility of materials, and integrating with Alma.  Prior to Leganto, citations had to be created in the Alma system and pushed out through the discovery service. Argo expresses that “Leganto is an improvement because it integrates both traditional library catalog materials and more atomized content from the Central Index, resulting in the best being available from both worlds.”

Embracing this digital transformation and integration with other parts of the university confer many benefits, including more affordable course materials, increased ROI on library investments, increased collaborations between Library Staff and outside stakeholders, more accurate delivery and linking of course materials in courses in the course management system and operational efficiencies in library access services.

Students see the service and see possibilities, “This is great…You should open this up and we can make lists,” thus enabling them to achieve the dream of every educator to empower students to be more accountable for their own learning. Leganto is so flexible that faculty are using it in “ways we didn’t even imagine.”

In terms of sustainability and data-driven outcomes, the Associate Director for Campus Sustainability was impressed with Leganto’s capability to link the library and university initiatives (and the amount of printer paper saved!). Leganto tracks the number of times a citation is clicked. Participation metrics transparently offer student engagement data.

The greatest success from Leganto has been the “new and improved” collaborative process between faculty, librarians, IT, and instructional designers–new partnerships that would not have previously existed. This provides an avenue by which all constituents work together toward achieving goals important to the university. Students who once stressed about the affordability of textbooks and course materials are no longer faced with barriers to success imposed by high-cost materials. University of St. Thomas students are more active in courses and achieving deeper, more meaningful connections with content.

Want to learn more? Watch the on-demand webinar with the University of St. Thomas.